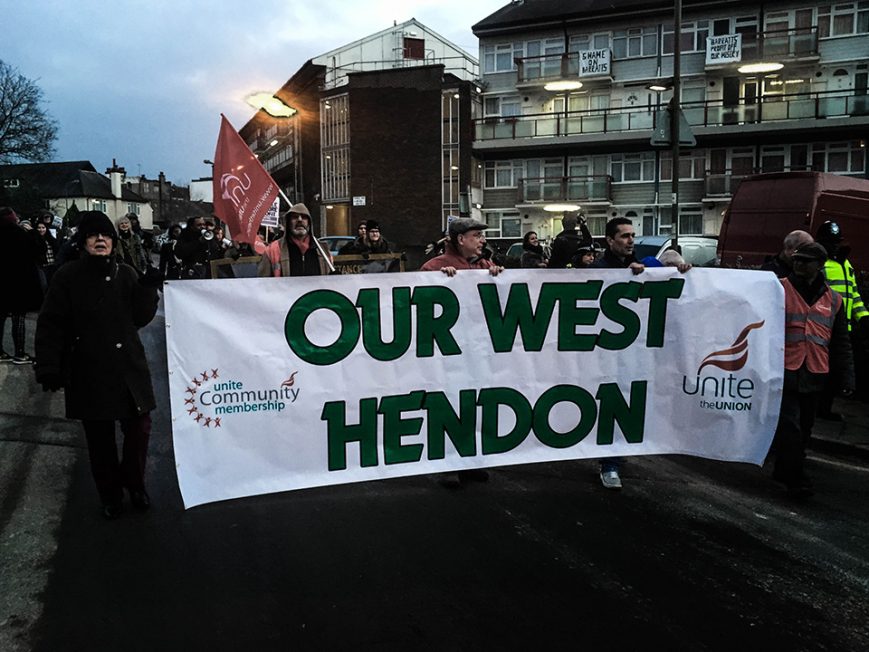 This 1960s & 1970s housing estate comprised of low and high rise flats. The construction type was Bison which is a form of Large panel concrete construction.

Our involvement began shortly prior to the Compulsory Purchase Order being made in June 2014. It quickly became apparent that the most of the estate’s residents felt angered and disenfranchised by a regeneration scheme which had in many ways been badly managed.

In response to ‘The London Borough of Barnet (West Hendon Regeneration Area) Compulsory Purchase Order No 1 2014’, we submitted over 400 pages’ worth of objections on behalf of over 50 clients. In January 2015, the Order was considered at a Public Inquiry under court rules. Our Director, Dan Knowles LLB PG Dip MRICS, was the residents’ only professionally qualified Expert Witness at the Inquiry. He also participated every day as the residents’ only professional advocate, cross examining a large number of Expert Witnesses representing London Borough of Barnet. His opposite number at the Inquiry, representing London Borough of Barnet was a QC, supported by a Barrister.

Two subsequent Compulsory Purchase Orders were made on the Estate, which we also advised clients on but had no need to participate at the Public Inquiry.

A further Compulsory Purchase Order was served affecting a number of the commercial property owners on the nearby West Hendon Broadway, which we also represented.

Negotiations were protracted and both technically and emotionally challenging. Due to a stalemate in the first phase of regeneration, it was agreed that a voluntary arbitration process would be entered into. As the Surveyors representing by far the most leaseholders, we were the only company to submit evidence to the Arbitrators. Our evidence totalled close to 100 pages, including rebuttals, and saw significantly increased offers. We negotiated a further incentive payment for leaseholders, subject to a large number of agreements being reached, which saw settlements even higher than the arbitrators’ reports.

Over the course of our first 17 months on the estate, we negotiated –

1) Settlement increases averaging close to £120,000 for the majority of properties

During the course of our involvement, we worked closely with residents’ groups such as Our West Hendon and Peoples Power West Hendon.

This high profile regeneration scheme has seen extensive media coverage, both locally and nationally, and is regularly quoted in printed press. In March 2016, it was was the main focus of an hour long BBC documentary on housing regeneration called “The Estate We’re In”.

Negotiations were initially with Capita, who represented London Borough of Barnet. However, agreements were not reached until the Surveyors representing the Council changed to GVA (since re-named Avison Young following a takeover).

In the second phase, we negotiated detailed terms for ‘Put notices’, ‘Lock in notices’ and Indexation to provide our clients with budget certainty when buying elsewhere.

With the third phase now well underway, our client base on the estate has topped the 100 mark, making it the third Estate we have reached that figure on, along with South Acton and Grahame Park in Colindale

West Hendon leaseholders said of us: