This compensation is what the law determines should reflect the imposition of losing your home to Compulsory Purchase.

The law does not distinguish between people who have little or significant attachment to their homes or businesses. As long as you have owned for at least a one year period, which is the requirement for entitlement, the amounts above are the same regardless of whether you’ve owned for one year or sixty one years.

We have to work out how much we believe your property would sell for if hypothetically the acquiring authority’s proposals were cancelled. Imagine therefore that empty properties were reoccupied where possible and that any associated development then stopped. Also, that any major works on your property that have been suspended by the authority were then to be carried out, albeit potentially with the cost of them to whoever was to hypothetically buy your property.

If there are associated transport schemes which aid the regeneration, these can sometimes be disregarded as well. For example, if there is a new tube station being built near you, the law in some circumstances can require that it is disregarded in the valuation.

We will work out your Market Value by reference to transactional evidence. Asking prices for unsold properties are of little reference.

The most appropriate transactional evidence will be of similar properties nearby, of the same construction type and appearance. If there are similar properties to yours that have sold on Compulsory Purchase terms, we shall assess whether the seller was acting prudently when agreeing sale terms. It may be that they negotiated well and secured a fair deal. It may be that they negotiated poorly and secured a poor deal. We can quote judicial rulings that permit us to use the relevant evidence and attach less weight to evidence where appropriate.

The law requires that if you are selling a property under Compulsory Purchase, then both your Solicitors and Surveyors fees should be payable by the buyer. After all, if you’re losing your property against your will, it’s only right that you aren’t paying for it to happen.

A solicitors job will be to transfer ownership over to the buyer in exchange for however much is negotiated. They won’t do so until you are ready or forced but getting the process started once terms are agreed is important. That way when you do find somewhere to move to or are otherwise close to being ready to sell, the solicitors can dot the ‘i’s, cross the ‘t’s and get everything ready quickly. We will recommend solicitors with the relevant experience of Compulsory Purchase sales or you can find your own. Their reasonable costs will normally be paid by the buyer.

Similarly, Surveyor’s fees are payable by the buyer. We’re the Surveyors. Our job is to value and negotiate on your behalf and advise you through the process. We also help with a number of other issues such as helping to find somewhere to buy or dealing with tenants who need to be evicted.

In most cases, we negotiate a percentage of the purchase price as our fee. This is in addition to the amount our clients receive so there are no deductions. It also means, that in most cases, the more ur clients receive, the more we receive. Sometimes we work on a timesheet basis but these cases are increasingly few and far between. Either way, it is the buyer who pays.

On the rare occasion where we charge clients directly, we explain these in writing before our service begins.

...AND YOU MAY ALSO  BE ENTITLED TO

First off, let’s be clear to correct one common misunderstanding. Disturbance compensation and the 10% or 7.5% resident or non resident owners receive are completely separate. Qualifying homeowners receive both.

Disturbance compensation is to cover certain costs and losses associated with selling, moving or buying. The table below gives some examples of typical items of claim. It is indicative only so please do speak with us to clarify exactly what you’d be entitled to. 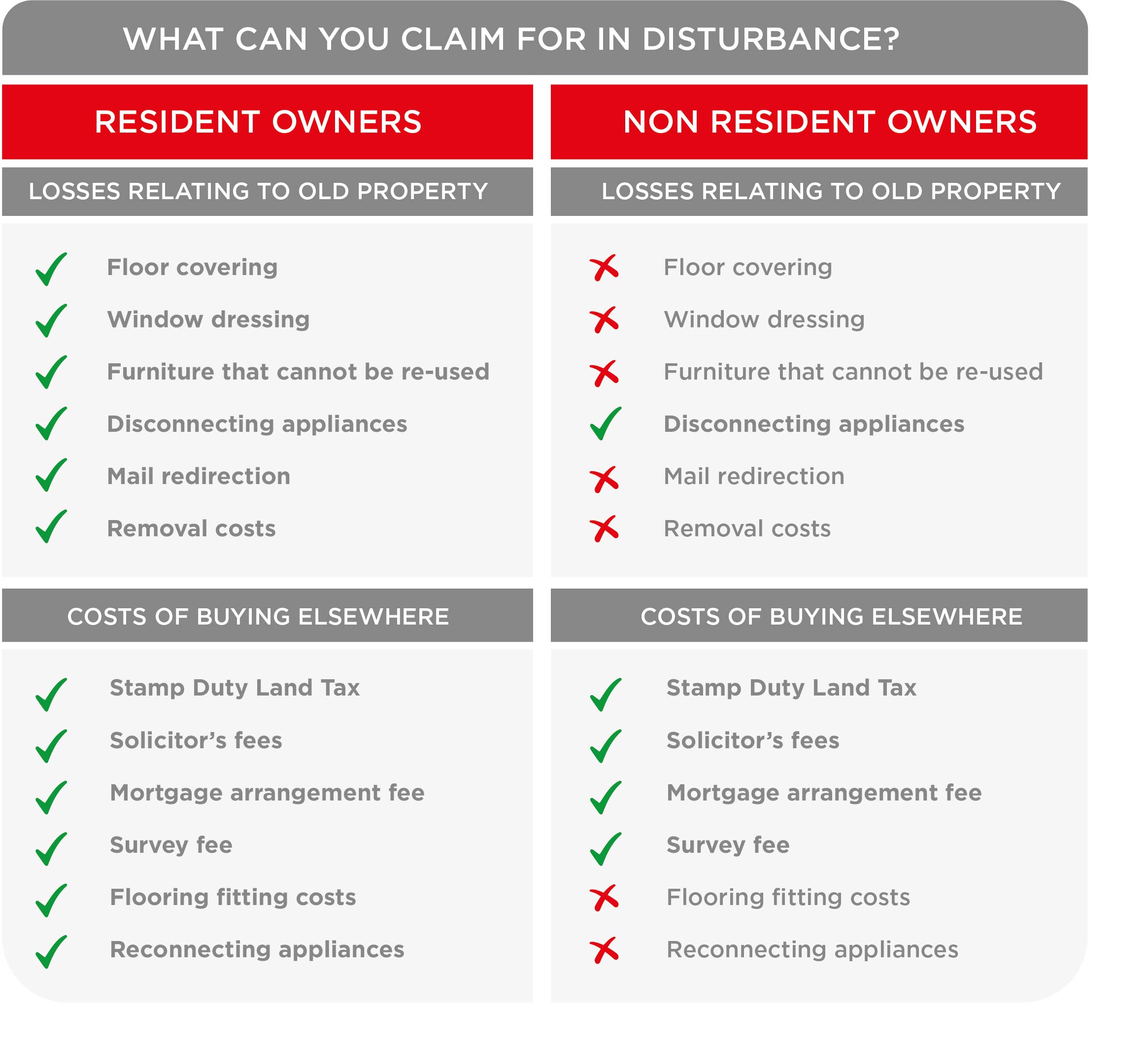 We would estimate what you’d be entitled to and negotiate for you to receive hopefully at least that amount on the day that you sell. No further claim can then be made.

For homeowners, this gives some certainty and means you don’t need to pay out and then try to reclaim.

The risk involved is if the amount is less than you would receive if you went down an evidenced route. If we’re doing our job well, that shouldn’t be the case though.

This is where you get your receipts together and submit a claim after you have sold. We can of course help with this too, providing the legal basis for each element of claim that we believe should be paid for.

When you can claim

Six years after you have sold or your property has been taken through exercising of Compulsory Purchase Powers, you will lose the right to an Independent binding assessment of the claim. This means if agreement has not been reached, you would have no right to refer the matter to the Independent Lands Chamber.

We have known one landowner (thankfully not a client of ours) lose over £500,000 because he did not agree his claim or refer the matter to the Lands Chamber in time. The acquiring authority reassessed the claim as £nil and there was nothing that could be done about it.

On a pragmatic basis, the Lands Chamber which is also available to resolve a disputed Market Value, is too expensive and time consuming to be worthwhile. It can often take a year to get a judgment and may cost tens of thousands of pounds. Both sides should use the Chamber only as a very last resort.

For non resident owners, their replacement property must also be acquired within one year of when they sold or were dispossessed under the Compulsory Purchase. It must also be an equivalent investment property.

Strictly, disturbance compensation entitlement does not materialise until a property has been lost to Compulsory Purchase. However, most acquiring authorities will suggest that they buy properties on Compulsory Purchase terms. When there is an agreed sale, entitlement to disturbance compensation is then governed by the sale contract. We will always provide some wording to solicitors that we recommend is incorporated into the sale contracts.

Do make sure that your solicitors follow through with this. It is important as we have known some refuse to pay out on items because their contract says something slightly differently.

Disturbance compensation is all about equivalence – making sure you are no better or worse off. For example, stamp duty is typically paid but only up to the amount if you bought somewhere with the same Market Value that you sold at.