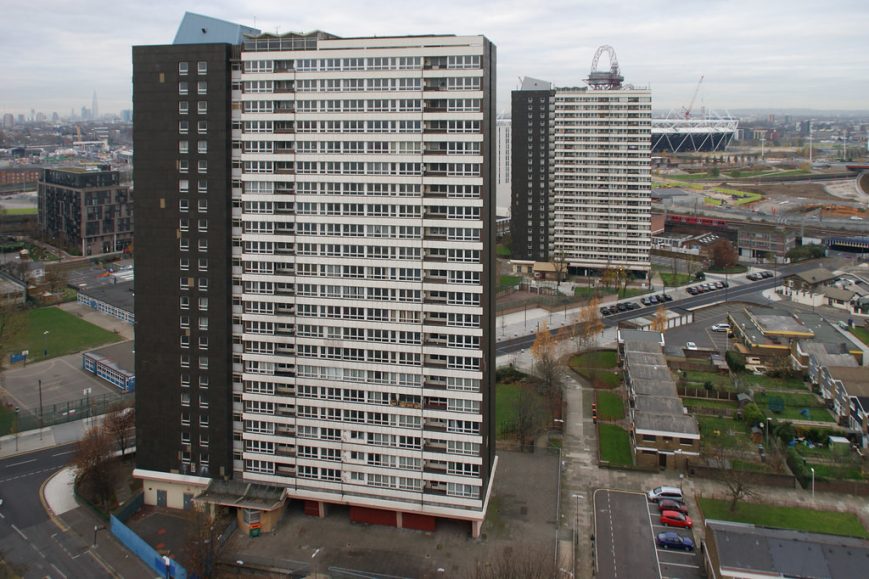 The Carpenters Estate is located in Stratford, East London and falls within the London Borough of Newham. Stratford, over recent years has seen significant development, mainly due to the London Olympic Games in 2012. It is home to the Westfield (Stratford) Shopping centre, which including the surrounding shopping area, is the second largest urban shopping centre in the European Union (ed. at the point of writing this piece, the UK is still an EU member state). The estate is also a stone’s throw away from the new home of West Ham Football Club and is very well connected to the City’s financial district.

The estate itself was constructed during the late 1960s and contains a mix of housing types from rows of terraced houses, low rise blocks and 23-storey tower blocks. Plans to regenerate the Estate were initially proposed in the early 2000s, however a lack of investment and funds due to the global financial crisis in 2008 halted the proposed redevelopment for some time. The process was revived in 2016, with the Council beginning the selection of developer partners, however, was stopped in December 2018, following the appointment of Mayor Rokhsana Fiaz OBE, who is undertaking a review of the regeneration options on the estate.

Whilst the Council reviews this process, the uncertainty caused by whether the scheme will go ahead or not can be a great source of stress and confusion for many residents on the estate. For homeowners who wish to sell their properties back to the Council, they are still able to do so and on attractive Compulsory Purchase terms. Our role for any homeowners who appoint us is to ensure that we negotiate a fair Market Value and related compensation, whilst guiding you throughout the entire process.

We are already representing a number of homeowners on the estate.

To find out how we can help you or any one you may know who is affected by the regeneration of the Carpenter’s Estate, please call us on 020 3011 5300 or e-mail info@sawyerfielding.co.uk for more information.

Surveyors we negotiated with: Savills